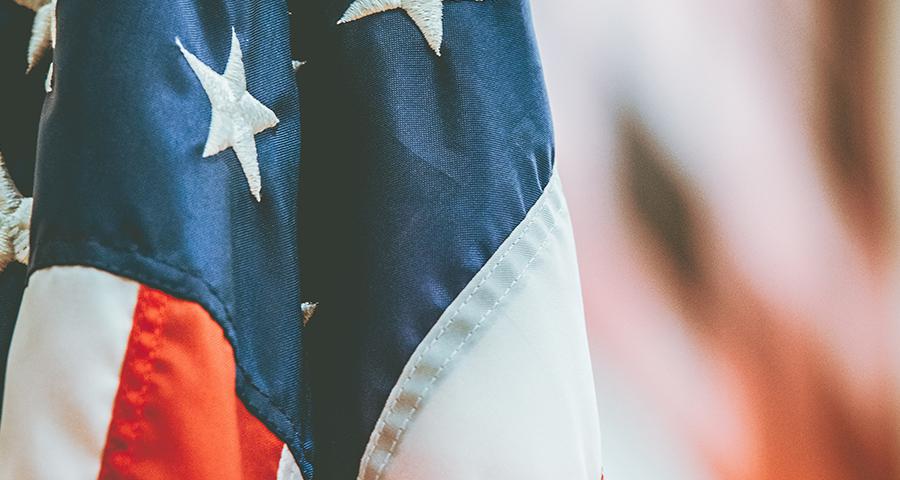 This Autumn, the world will witness one of the most awaited presidential elections in U.S. history. On November 3rd, Americans will vote to elect the leader of the world's biggest economy and one of the largest military structures. Understandably, the elections' outcome will significantly impact reforms, policies, and international relations.

According to a survey from the asset manager Hartford Funds, 93% of investors believe the presidential race will affect the stock market, while 84% admit they expect to change their investing habits as a result.

But should they? Let’s pull the curtain and find out what history can say about…

Historical data reveals that markets’ behavior depends on whether we are looking at the midterm election years, the pre-, or post-election period.

A review of market data of the S&P 500 for the last 90 years suggests that equity and bond markets tend to behave more calmly in the 12-month run-up period prior to the presidential elections. Compared to non-election years, they have produced between 1.00% and 2.5% fewer gains (6.00% vs. 8.5% for the stock markets, and 6.5% vs. 7.5% for bond markets).

Data about DJIA indicates that, since 1833, the index has averaged 10.4% in the pre-election 12-month period, compared to 6% during the election year. According to JP Morgan Asset Management, the S&P 500’s historical volatility had been higher in election years. The reason is that investors try to “price” the probability of the candidates’ ideas.

On the other hand, the post-election period is marked with relatively lower stock market returns, with an affinity for bonds to outperform slightly. U.S. Bank Wealth Management division's reports reveal that the stock market consistently beats projections in the year after the midterms.

When it comes to the effect of the winner’s political party affiliation, conventional wisdom reveals that markets should react more positively when a Republican president is elected as the ideas are considered more market-friendly. Looking back to data collected since 1900, however, Democrat-elected presidents have been more favorable for stocks, with the DJIA averaging 9% compared to 6% for Republican presidents.

According to Russ Koesterich, chief investment strategist at BlackRock, normal variations in annual stock market returns will mitigate the difference. That is why, today, most analysts suggest that there is no difference in which party takes control over the White House. In the end, the market retains its long-term growth either way. 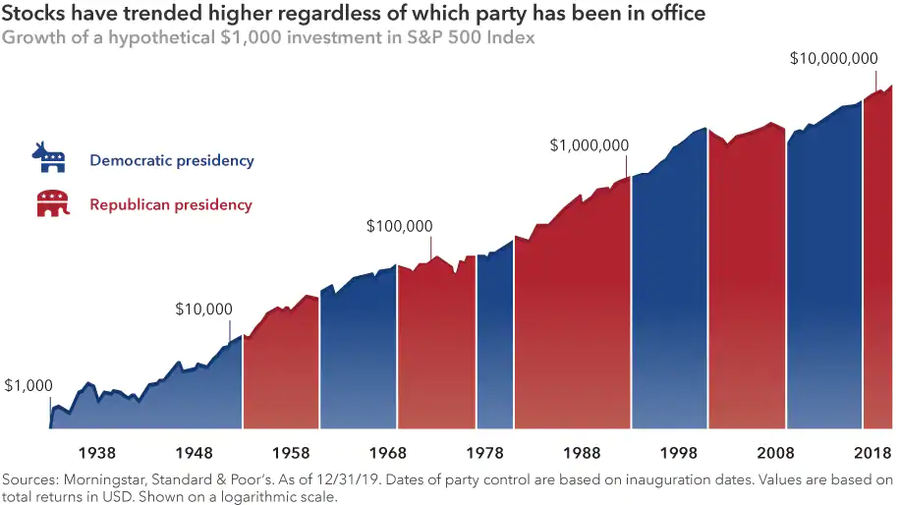 The thing that can affect the market more notably is whether there is a shift in power. According to some reports, when a new party comes, stock market gains usually average 5.00%. On the other hand, when the president is re-elected, or the same party retains control, the returns average 6.5%. The reason for markets to react more positively to the latter is that they already know what to expect, and the uncertainty is lower.

However, all this could turn out wrong if the candidates give investors a major reason to start a selloff.

When it comes to the Fed, the common narrative is that it is “election neutral” as it tries to maintain a more quite policy in election years to avoid destabilizing the situation.

The historical records reveal that since 1948, the US economy performs slightly better in election years. GDP growth is higher with 0.3% on average, while potential growth outperforms by 0.4%. The reason is the expansionary fiscal policy of the cabinet in charge ahead of elections. 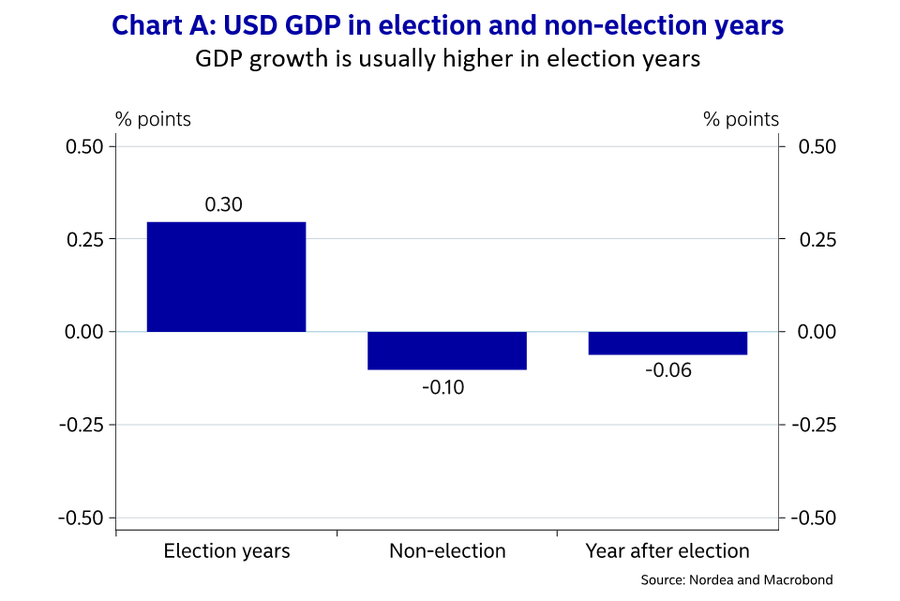 An important remark is that, since 1932, an incumbent US president has never failed to win re-election, unless a recession unfolded during his time at the office.

If we are to analyze the presidential race at any other point in time, we would usually consider common factors like the state of the economy, the candidates' ideas about fiscal and monetary policy, views on international relations, proposed reforms, etc.

However, the equation in 2020 has a unique variable - the COVID pandemic. President Trump’s handling of the health crisis was a total disaster. The US was hit the hardest, with close to 200 000 deaths. In comparison, the EU lost approximately 15 000 fewer lives, despite its significantly bigger population.

The pandemic has brought uncertainty to the markets and further distorted investors’ perspective. And markets hate uncertainty. According to a 2019 Dimensional Funds report, for the period 1928 – 2016, negative market returns arose only four times, all of which accompanied by geopolitical events leading to global instabilities and market uncertainty.

All this in addition to the looming economic recession, and we have the reason why Mr. Trump went from a favorite to an underdog in the span of six months. Survey data from the Pew Foundation revealed that over 67% of the Biden voters are more like "anti-Trump" votes.

At the start of this year, the consensus was that Donald Trump would be re-elected easily, due to the resilient US economy and his favorite metric – the performance of the S&P 500. Fast forward to a month before the elections, and polls and betting markets indicate a convincing victory for Joe Biden. Even the Nasdaq index that moved in line with Trump’s positive re-election prospects, now keeps climbing, despite his diminishing chances. 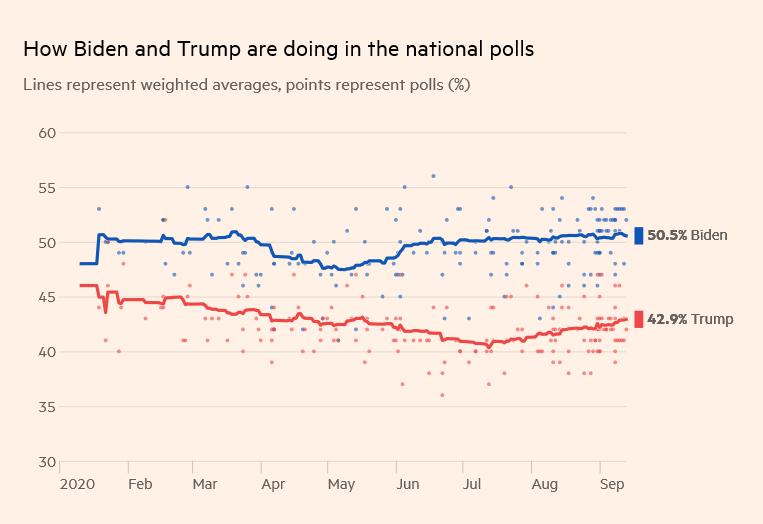 The potential elections outcomes and their effect on the market

Trump's international policy and the trade war were at the core of the global manufacturing slowdown, which indicates that a potential second term will further increase the risk of escalation. In such a scenario, the most affected will be international stocks like European carmakers, for example. U.S. equities are expected to continue their rise thanks to Trump's pressure on the Fed, the tax cuts, and the deregulation.

However, according to Stephanie Link, chief investment strategist and portfolio manager at Hightower, the market would favor a scenario where Trump is re-elected, and the Congress is split between both parties. She adds that small companies and sectors like financials, technology, and traditional energy might rally on the news.

For quite some time, the Democrats couldn’t come up with a clear campaign candidate. While Elizabeth Warren and Bernie Sanders advocated for radical policy changes, including going against the big banks and tech firms, banning fracking, imposing wealth taxes, and increasing the corporate taxes, Joe Biden’s policy is more moderate. Although he still plans to reverse tax cuts, markets are likely to take a Biden win as mildly positive news.

According to Link, a small selloff between 2% to 4% might be plausible, creating "buy-the-dip" opportunities for investors in pharmaceutical and tech stocks. On the other hand, infrastructure, clean energy, and healthcare services companies are projected to do well. Link also believes a scenario where Biden wins, and the Congress remains split between both parties will lead to a market rally.

Lizz Ann, Charles Schwab’s chief investment strategist, shares similar ideas, admitting that a Biden presidency won’t be “a guaranteed disaster for the stock market”. According to JP Morgan’s analysts, such a scenario can even have a neutral-to-slight-positive effect on markets. Their conclusions lay on Biden’s proposed policies, including infrastructure spending, softening on tariffs, higher wages, and a generally more diplomatic approach, which should lower the volatility levels and increase the aggregate demand.

According to JP Morgan's forecasts, even a partial reversal of Trump's Tax Cuts and Jobs Act (TCJA) benefits will send rates back up to 28%, leading to a hit on S&P 500 of up to $9 per share. However, they also conclude that, in COVID times, the more likely scenario is a prioritization of job growth over policies that threaten economic growth. According to the bank's analysis, the potential outperformers in such circumstances are expected to be companies like Tesla, Johnson & Johnson, and Boeing. Similar views are also shared by the UBS Chief Investment Office, which projects a mounting pressure on heavy industries and carmakers due to Biden's greener agenda. Such a scenario will also lead to benefits for Asian solar and biotech companies.

UBS Wealth Management suggests that after the elections, some initial volatility might be expected, but the good thing is it would be short-lived until investors learn to manage the uncertainty surrounding proposed policies. However, the volatility might be higher if the result is inconclusive. Still, according to Thomas McLoughlin, Head of the Americas Fixed Income division at UBS Global Wealth Management, even then, it will weaken over time and won't justify shifts to safe-haven assets. 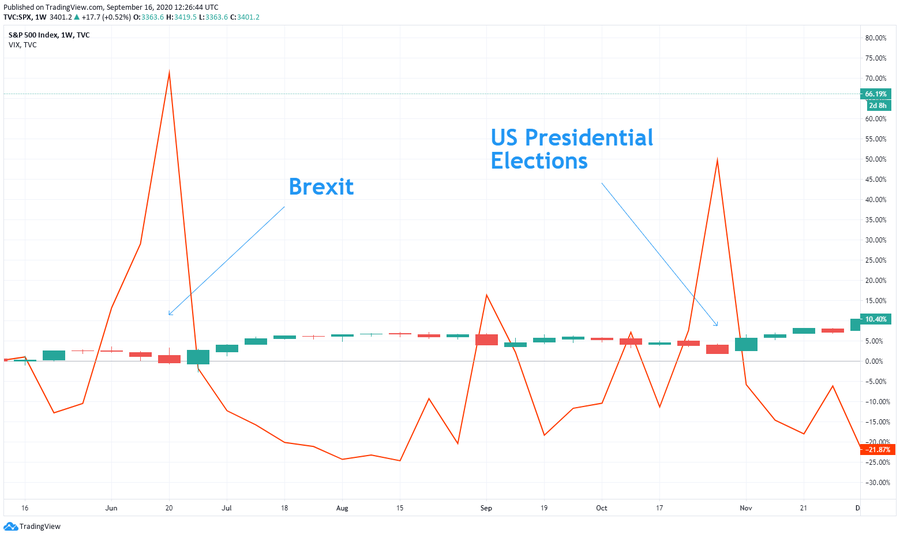 Morgan Stanley predicts that, in a situation with a Republican President and Senate and a Democratic House, we might witness short-lived recession and continuing deregulation that benefits the energy, telecom, and asset management sectors. In a scenario with a Democratic President and House and a Republican Senate, the bank predicts pressure on the financial, energy, telecom, I.T., and pharmaceutical sectors, accompanied by better handling of the pandemic. Considering that the five FAANG stocks (Facebook, Amazon, Apple, Netflix, and Google) are 20% of the U.S. stock market and are currently pushing it up, the whole market might suffer if they come under scrutiny.

In case Republicans win all three, the bank expects a V-shaped recovery, with an extension on the expiring tax provisions and a massive anti-China policy. This would lead to a strong dollar and potentially weakened T-bonds. Again, U.S. energy, telecom, and asset management shares are expected to benefit. In an all-democratic leadership, Morgan Stanley projects high infrastructure spending and expansion in the healthcare sector, accompanied by higher interest rates and inflation. The likely winners from such a scenario are healthcare, international oil and natural gas, transportation, and large-cap banks, with potential dips in pharmaceuticals.

How to play the market

The consensus among experts is that, although investors might be tempted to make bold moves and capitalize on the political uncertainty, it is better to retain their long-term approach. The reasoning is that economic cycles last much longer than presidential terms.

Instead of focusing on capturing the short-term volatility, investors should be aiming at portfolio evaluation that takes into account new policies with the potential to impact their long-term performance.

According to Tony DeSpirito, Co-manager of BlackRock North American Income Trust, investors should be looking at high-quality sectors such as technology and healthcare that can offer long-term growth in either scenario. Jonathan Simon, Manager of JPMorgan American Investment Trust, suggests looking for companies that have proven to be adaptable and capable of overcoming unexpected crises. On the value side of the portfolio, he provides Booking.com as an example of a business that should be highly affected by the pandemic but manages to adjust its cost structure and come out even stronger.

The UBS Chief Investment Office’s advice for investors is to adhere to a strategic portfolio allocation with long-term goals in mind. This includes anything from automation, biotechnology, and renewable energy, to sectors that will benefit from global trends like globalization.

If investors want to hedge against the uncertainty of presidential elections, they should consider sectors and companies with no US exposure. This translates to a global, multi-asset portfolio that is resilient to industry- and regional-specific risks and with the potential to benefit from all election outcomes. Examples include domestically-oriented niches like utilities or stable sectors like consumer staples. There are also investment opportunities, projected to do well in either outcome, including sectors exposed to infrastructure and technology investments.

All analysts are united by the idea that a Biden presidency will favor emerging markets and foreign equities. According to JPMorgan, equity returns in emerging markets are projected to surpass those of other markets in the upcoming years, which means they should be prioritized when building or rebalancing a long-term portfolio.

In a nutshell, the cream of the crop on Wall Street doesn’t see the need for any drastic changes in well-diversified and balanced long-term portfolios. And there is sound reasoning behind this.

As the Nobel-laureate Paul Krugman states in his New York Times opinion pieces, nowadays, the economy and the stock market can’t be further away from each other. The Federal Reserve Bank of New York’s weekly economic index indicates that the economy is still more depressed than it was at any point during the post-2008 recession. There are 11.5m fewer jobs in the US economy than February this year.